Water-Ways: A Haiku Journey in Ghent

silver fry flicker
along the shifting waters
and snaffle a star 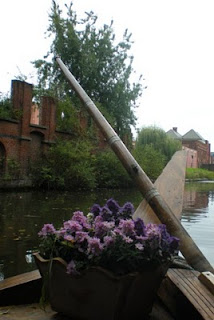 The festival haiku by Vermeylen is one of the oldest haiku written in Dutch but also a natural choice given that Ghent is a city of rivers and waterways that weave through and around its gothic buildings and cobbled streets.

And the theme of water was more intimately introduced to the delegation of assembled haiku poets after dinner on Monday and Tuesday evenings with candle-lit ‘ginko’ in hand-made and man powered, long-oared, wooden boats. With blankets over our knees and notebooks in hand we were steered silently along the dark water, under low stone bridges, with the lights and stepped gable roofs of the city above us.

someone singing
from an open window
the boat drifts 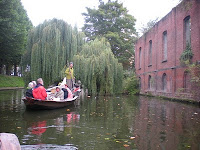 The boat trips were repeated by day to allow us the maximum amount of exposure to the city that would be the inspiration for our haiku. Haiku by over 30 poets from more than 20 countries that would, within the space of five days, not only be translated into four languages and published in a perfect bound anthology, but also be printed in more than 15 languages on banners fixed to the stone walls of houses and bridges along the city’s rivers.
It was an astonishing accomplishment by the festival’s organisers, Ip Man of Viadagio vsw (Chairman) and Diederik de Beir (Programme Director) and their team of volunteers. Viadagio literally means ‘slow way’ and the organisation is dedicated to sustainable living and a lifestyle that respects the environment. Its flagship restaurant, Panda, in the historic centre, was a welcoming and nurturing base for the poets each evening where we were served delicious vegetarian suppers and organic wine by Ip Man’s wife, Denise, and her team of cooks, before returning to our host families around the city.


David Cobb’s hosts owned a pet turtle which had the freedom of their living room and kitchen, a splendid exemplar of ‘Viadagio’! Asked to compose a souvenir of his visit, David created a haiga of this haiku:

Take your time, Turtle —
there’s plenty of it yet
in timeless Ghent!


On Tuesday afternoon everyone gathered at the Poëziecentrum, for a tour of the four-storey converted guild building in the centre of Ghent, which since 1980 has been a dynamic, independent and democratic supporter of Dutch and Flemish poets. The centre boasts a publishing house, organises educational activities, offers a ‘search for/identify a poem’ service to the general public, as well as housing an extensive collection of poetry books, pamphlets and anthologies in Dutch, Flemish and Afrikaans from all around the world.
Wednesday was the principal day set aside for writing, editing and translating our haiku and while certain poets and editors had been appointed as official translators there was also a lot of informal and friendly discussion between the 7 native English speakers (Sharon Burrell, David Cobb, Jim Kacian, Anita Krumins, Anthony Kudryanvitsky, Lynne Rees and George Swede) and their European counterparts.
Thursday was designated ‘International Haiku Day’ and saw us back at the Poetry Centre, in the Het Toreken (Little Tower), for a full day’s programme of seminars, workshops and readings, wonderfully punctuated by the classical guitar virtuoso, Alexander Makay.
Jim Kacian (USA, founder of the Haiku Foundation and owner of Red Moon Press) gave the keynote lecture on ‘Haiku Mastery’, identifying the need for form, content and style to work together. This was followed by a history of haiku in Flanders by Diederik de Beir, Ion Codrescu’s (Romania) ‘The Art of Juxtaposition of Image & Text in Haiga Painting’, an insightful demonstration of the different ways to read haiku by Pietro Tartamella (Italy), ‘Humour in Haiku’ by Zinovy Vayman (Russia), ‘The Use of Iconic Place Names (uta-makura) in Western Haiku’ by David Cobb (UK), and ‘Haiku Transcription of Chinese Poetry’ by Paul Mercken (Belgium/The Netherlands). The day was brought to a close with haiku readings by Jean Antonini (France), Serge Tomé (Belgium) and local haiku poets.
On Friday, after an official reception at City Hall hosted by Alderman Lieven Decaluwé, we strolled through the streets of Ghent with Luc, our formidable tour guide, unravelling the city’s past for us: its architecture and achievements, its people and punishments, the squares and churches and halls where people’s lives were written into history.

at her window box
Rapunzel in a garret
dead-heading flowers


Before the festival began there had been rumours that Herman van Rompuy, President of the European Council and haiku poet in his own right, might possibly attend one of our events, but, as the week progressed, the rumours subsided. The level of security surrounding our entrance to the Stedelijke Openbare Bibliotheek Gent, Ghent’s Public City Library, on Saturday morning should, perhaps, have alerted us that something was afoot. But it was not until several burly men in dark suits positioned themselves at the windows and doors of the conference room, and a slight but elegant man made his entrance, that we realised what was happening.
Mr van Rompuy walked around the room shaking hands with each of the haiku poets before speaking to the assembled public audience, with humility and humour, about his outing by the Press as ‘Haiku Herman’ and we were all delighted to hear that his own haiku would appear alongside ours in the festival anthology. A subsequent musical interlude by local musicians, Trio Guaraja, led to panel discussions hosted by the well-known journalist, John Vervoort, (De Standaard and Poëziekrant) who quizzed selected participants, including David Cobb and Max Verhart (The Netherlands), about haiku and why it appealed to them.

The end of the week had arrived and was celebrated in style on Saturday night with a Gala dinner at Panda Restaurant for poets, their hosts, and invited guests. A champagne reception was followed by dinner and wine, a stunning performance of Chopin by four talented young musicians, an announcement of the winners in the Flemish/Dutch haiku competition, ‘Along the Water’, and a reading of the anthology haiku in Flemish, French, English, German and some Japanese. 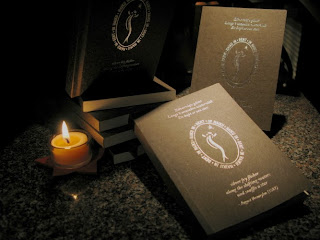 It was after midnight when we left the restaurant, our footsteps echoing along the quiet streets, with our silver gilt-decorated anthologies in our hands, the week’s activities still bubbling through our minds. The next day we would be even more excited and proud to see our words printed on banners and strung along the river, being read and photographed by inquisitive and surprised audiences as they motored past in the tourist boats.


day moon
the river and I
don’t say a word