On the horizon: editing for CHO: Contemporary Haibun Online 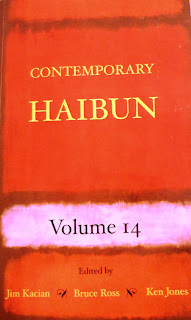 If you're interested in haiku writing you're no doubt already aware of the web journal Contemporary Haibun Online. Jim Kacian, and his editorial team, published my first haibun here back in 2007 as well as in their sister print publication the annual anthology Contemporary Haibun (Red Moon Press), about to celebrate its 15th issue.

So I'm fizzing with new year delight to announce that I'll be one of three new editors at CHO after April 2014 alongside Bob Lucky (Editor in Chief) and Marjorie Buettner, both of whom are internationally successful haiku and haibun writers themselves.

All my writing energy from the last two years was spent in the research and writing of Real Port Talbot, an upbeat and offbeat story of my hometown in South Wales, UK. Amongst the 70,000 words of history and commentary you will find some poems, some memoir and a few haiku, although they are in the minority. But editing other people's work always inspires my own and I am sure that my involvement in CHO will encourage me to get back to writing haibun, a form that brings together poetic epiphany and narrative, a form that enabled me to write about my life in a way that felt honest and precise and allowed me to produce my haibun collection, forgiving the rain in 2012.

So my new post with CHO feels particularly rewarding. I'm going back to where I started but, hopefully, with a deeper understanding and an appreciation of the form. And with a desire to encourage new and established haibun writers too.