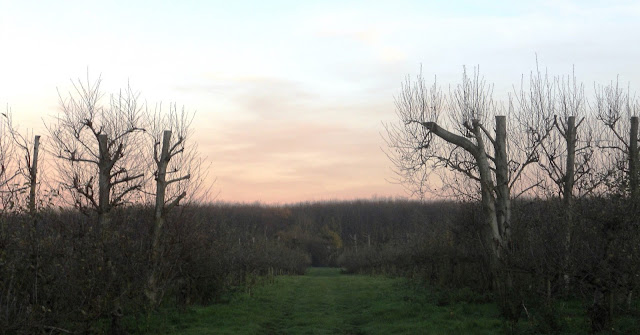 It was the year you were building the house, after you'd pulled down the derelict tractor sheds, after you'd put in the footings. You came to me and said, Be ready at 6.30 tonight. It was October. It was almost dusk. You'd set up two deckchairs, lit a bonfire with old timber, opened a bottle of red wine. And I said, What? And you said, Wait. And we waited and watched the fire and talked about the other places we had lived. And by the time it was dark and the bottle was empty I thought it had all been worth waiting for. But then you said, They never came back. And you told me how every morning that week a flock of Canada Geese had flown over as you worked, then back along the same path at dusk, and how much you had wanted me to see them too. They must have gone for good this time, you said. But they had not gone. I saw them when you described the rush of their wings, their irregular V. And you too, your hands releasing a shovel, a rake, the birds marking the close of your day. And they still have not gone. Here is someone else lifting their eyes from the page to whatever sky canopies over them, and look! Look at the length of those long dark necks as they dip and rise as one to meet the lay of the land.