What Feeds Us: a review of Harriot West's 'Into the Light' 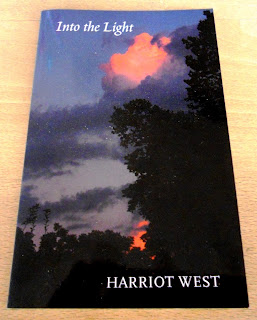 Let’s start with ‘scrapple, cornmeal mush with … sausage’, follow it with Thanksgiving turkey with ‘cranberry jelly and the sweetness of honey-flavoured yams’, then ‘raspberries … with clotted cream’. Except these dishes fail in their intrinsic capability to feed or nourish, laced as they are with conflict, anger and grief in the early haibun of Harriot West’s collection Into the Light.

The ‘scrapple’ becomes a battleground for a child’s love in 'Empty Spaces'. The turkey cannot mask an almost unbearable despair in ‘Abundant Blessings’. The raspberries, ‘the seeds cracking’, foreshadow the death of a grandmother and the failure of adults in a child’s life to explain and comfort (‘The Day Grandma Died’).

Into the Light is divided into three sections. The 17 haibun in ‘Sepia Shadows’ explore, in a compressed chronology, the narrator’s childhood, youth and adulthood up to the death of her parents. The middle section of 10 haiku act like stepping stones from emotional hesitancy (‘Auld Lang Syne / a desire to straighten / the stranger’s tie’) to the suggestion of sensual intimacy (‘the gate latch / clicks into place / night-blooming jasmine’). The final 12 haibun in ‘The Pinwheel’s Colors’ are resonant with the lust, expectation, romance, fantasy, sex and companionship of a new relationship, which, after the emotional chill of relationships in the first section has me, the reader, whooping in the margins, ‘You deserve this, girl. Enjoy!’

Me, the reviewer, is taking a more clinical approach. How are these haibun managing to make me think and feel? What decisions has the writer made about structure? How are the haiku functioning in relation to the prose?

West’s language is exact and evocative, her imagery rich with meaning and emotion. When we read, at the end of the first haibun, ‘Stories I Might Tell’, about a child who always said, ‘yes please, no thank-you’, of her first day at school wearing ‘thick brown socks and sturdy brown oxfords’ we have a precise idea of the order and control that surrounds her. The unapologetic, stark description of her mother being bathed in a nursing home in ‘Sometimes I Have to Look Away’ – ‘naked, strapped into a chair … her dimpled flesh exposed’ feels like a raw welt across our skin, a feeling reinforced by the concluding haiku:

winter sunset
the sky so red
it hurts

Structurally, the haibun utilise a number of different techniques to strengthen their influence on us. In ‘Neverland’, West exploits the effect of anaphora (1) as she recounts the close friendship of two little girls: ‘We were seekers … We were dreamers … We lived … We whispered … We trudged … we were young…’ and then deepens that unification by extending it to the closing line of the haiku: ‘we knew the way’.

Parallelism and repetition are employed to a similar end in ‘His Story My Story’ where a sister and brother’s alternate memories illustrate the subjectivity of experience:

And in ‘Eulogy For My Father’, West’s syntax alludes to the comforting rhythm and structure of nursery rhyme as a way to contain grief:

he was so nice
said the clerk

I really liked him
said the waiter

me too
said the child

But my most satisfying discovery, as a reviewer and writer (and one I just had to confirm by email with Harriot West), was not only the relationship that exists between all three parts of the haibun (title, prose, haiku), a relationship we expect to find in well-conceived haibun, but the specific rapport between individual titles and their concluding haiku. Take a look at these:

bedtime story
I cover the moon
with my thumb

deep winter
I hold a pomegranate seed
to the light

I could go on. I could enumerate nearly every title/haiku in the collection. But buy the book and play this rewarding game yourself. And learn from it too. I will.

To return to the theme of food, I suppose the titles could be seen as appetisers and the haiku as the sweet closure of dessert. That makes the intervening prose passages the main course, the real reason we are present at this literary meal. And it’s a meal (‘…potatoes caramelised to perfection, kale mixed with almonds grated parmesan and pomegranate seeds, shredded chicken braised with rosemary, green olives, capers and wine …’) followed by a hike at dawn, followed by another meal (‘… pizza … sprinkled [with] more cheese, olive oil and pepper flakes …’) in the penultimate haibun, ‘New Year’s Resolution’, that is a complete contrast to the food that opened this review: undeniably nurturing, a shared celebration of life’s gifts in the present. ‘When asked, say yes’, the narrator entreats us. ‘Say yes to it all.’

And I cannot imagine anyone disagreeing with her.

After the heightened emotion of this haibun the one that completes the book shifts down a gear. The first two parts of the triptych, ‘Suppositions’, rely on extended metaphors to suggest meaning rather than directly state it. And West’s quiet and expert touch is illustrated in the second part, 2. Love is a door leading into the next room. It begins, ‘Sometimes the door squeaks. Sometimes it sags. Sometimes a gust of wind bangs it shut, startling you from dreams.’ and builds on the same imagery to, ‘But it’s the door that matters most. I found it ajar, the knob slightly warm to my touch.’

West trusts herself, as a writer, to say just enough in this collection. The door has been left ajar for her readers to step into the events and memories of a particular life and extract the meanings that make sense to us, that make sense in our lives.

Footnotes:
1. A rhetorical figure of repetition in which the same word or phrase is repeated in (and usually at the beginning of) successive lines, clauses or sentences. Baldick, Chris, The Concise Oxford Dictionary of Literary Terms, OUP Oxford & New York 1990.
2. Into the Light, p. 24