I know the smoke and steam of industry. Tall chimneys, the cordons of terraced houses. Shift changes: men in caps and thick jackets leaving or returning home in the dark. 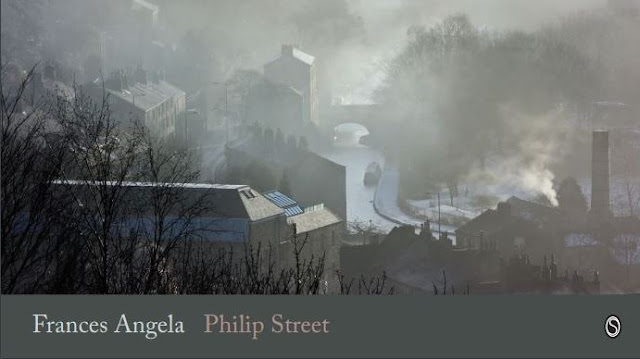 The cover of Frances Angela’s new chapbook, Philip Street, evokes these memories of my hometown in South Wales. I recall the streets named for landowners, builders and benefactors. Remember the kids we were warned against playing with …

And there was the library too:

the library just for the smell[ii]

I know that smell: dust, polish, paper.  But then my childhood path diverges from the one that unfolds in the subsequent pages: a children’s home, a catechism class, whiskey. This is not my story. Yet somehow, it is my story, the one I imagine, the one I experience through my senses…

… and through empathy and compassion for hope forbidden and lost.

Philip Street is a compressed and visceral journey from childhood to adulthood that is perfumed with joy, desire, grief and a concluding idea of acceptance or understanding:

demolished mill it all grows back[v]

‘The past is a foreign country; they do things differently there.’ The immortal first line of L.P. Hartley’s The Go-Between wistfully illustrates our relationship with memory: what we remember, what we think we remember, what is known, what can’t be known. But as writers we keep on visiting our foreign countries and its inhabitants. We keep on telling our stories, sometimes to make sense of things, other times to simply bear witness. And we tell the stories of people who, for so many reasons, may not have had a voice.